How far can LoRaWAN really go?

Under the ideal conditions, really, really far. Under real world conditions, still much further than you might think.

Wireless monitoring comes with a whole set of challenges.  One of the most difficult to solve is the problem of range.  LoRaWAN, the technology used by Conserv, provides best in class range, sending a signal much further than WiFi or Bluetooth.  WiFi and Bluetooth have their strengths, but sending data over very long distances isn't one of them.

Figuring out maximum range is always tricky, as it varies widely by the environment in which the measurement is taken, but you can get a sense of the range by looking at devices you already own!

If you have a pair of Bluetooth headphones, for example, you've probably noticed that you can't go more than a 10-20 feet away from your audio source before you lose the signal.  Some versions of Bluetooth and some longer range / higher power devices can go further, up to a hundred feet or more if there are no obstructions.

WiFi is a little better, but still has limited range.  You may have experienced this in your own home, where some rooms just don't get a signal.  WiFi vendors have responded to this limitation by creating mesh networks, or range extenders that essentially "repeat" the signal until your data gets to the internet.

LoRaWAN, on the other hand, goes a lot further.  Outdoors, when free of obstructions, Conserv has successfully tested LoRaWAN up to several miles.  Indoors, we can usually cover tens of thousands of square feet with a single gateway, even through concrete ceilings and floors.  We regularly see customers with sensors hundreds of yards from the gateway that still function reliably.  We mapped one, with the sensor over 100 yards from the gateway, across several floors of the building: 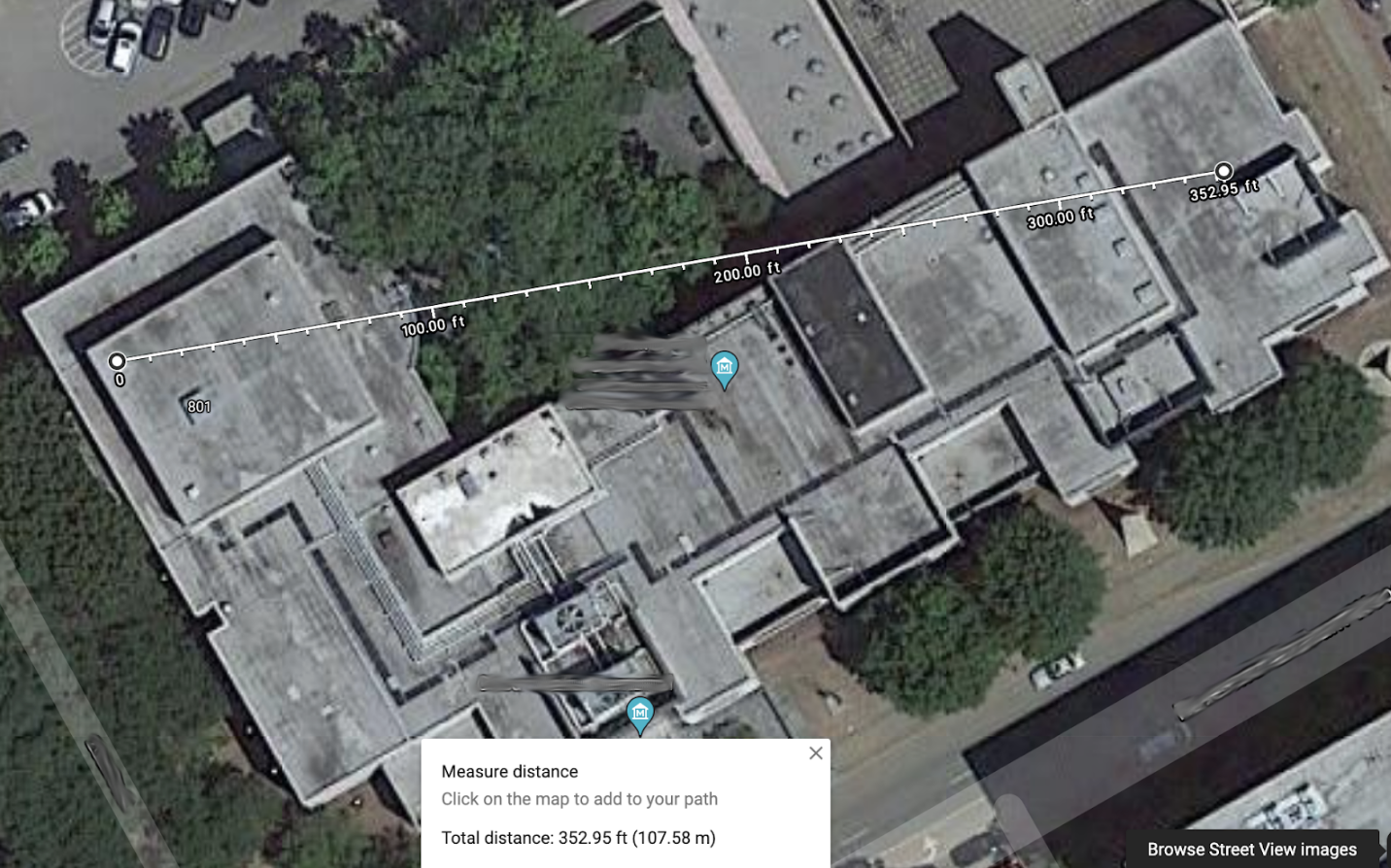 Why can it go so far?

Both WiFi and Bluetooth operate in the 2.4Ghz or 5.725Ghz frequency ranges.  These high frequencies can carry a lot of data, but not over very long distances at the permitted power levels.

LoRaWAN takes advantage of a lower frequency unlicensed ISM (Industrial, Scientific, Medical) band.  This lower frequency can travel further and through obstructions better than higher frequency signals used by WiFi and Bluetooth.  It also has the added benefit of being a less crowded frequency.  Not as many things use it, which means it is easier to get a clear signal.

In addition, LoRaWAN (which stands for Long Range Wide Area Network) is designed for range.  It can't send a lot of data.  You can't use it to stream Netflix, for example.  However, it excels at sending little bits of data (like sensor readings) reliably, over long distances while using tiny amounts of power.